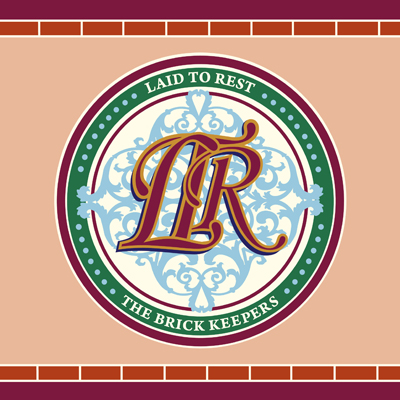 The Brick Keepers - Laid To Rest

Availability:
In-stock
ADD TO CART
€25.00
‘Laid to Rest’ is a project by Serena Korda with music composed by Daniel O’Sullivan.

Serena Korda and Daniel O’Sullivan (whose musical lineage has included ULVER, MOTHLITE, MIRACLE, ÆTHENOR, SUNN O))), MIASMA & THE CAROUSEL OF HEADLESS HORSES, GUAPO and GRUMBLING FUR) have been collaborating on art/music installations, performances and film works for the past two years. Often the works involve invented rituals focused around the making and creation of fantastical and absurdist folk objects. ‘Laid to Rest’ is the first release on KORDOS, O'Sullivan and Korda's record imprint, a limited edition deluxe 12” white vinyl with accompanying 20 page publication.

The Brick Keepers are a mythical marching band featuring the sublime voices of the Medieval Baebes, improvising legends Steve Noble and Alex Ward and guest appearances from Stephen O'Malley (Sunn O)))/Æthenor) and Kristoffer Rygg (Ulver/Æthenor). Ritual music is performed over a mysterious brick stack at the centre of ‘Laid to Rest’. Their hysteria highlights the meticulously painstaking procedure of collecting 500 dust samples from people, places and institutions around the world. This record charts the transformation of peoples dust from the almost invisible to the palpable. Inspired by the commercialization of waste in Victorian London from the enormous dust heaps of Grays Inn Rd to the civil engineering achievements of Joseph Bazalgette’s Sewage System.

O’Sullivan’s music responds to the process and making of ‘Laid to Rest’, from “Collection” and “Firing” through to the alchemical processes of “Holy Dust” and the final interment of the bricks in “Eulogy”. This mini opera (complete with libretto denoting a list of contents; "anaconda skeleton, flakes of bone", etc), accompanied dance performances whilst also providing the soundtrack to a new film work by Korda, entitled “Laid to Rest: The Brick Keepers Dance”.

On 18th September 2011 the brick stack was processed through the streets of London on a horse drawn carriage and buried in Brunswick Square Gardens where a limited number of _records were given to the mourners.

Laid to Rest is a bespoke, limited edition release, with artists and musicians notes, artwork by Serena Korda and music composed by Daniel O’Sullivan.