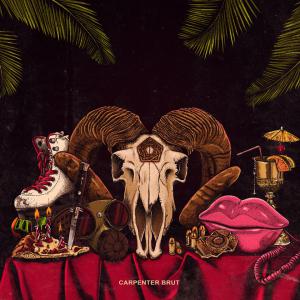 At first glance, Carpenter Brut's influences are 80s TV shows, B movies loaded with synthesizer music. Listening to his home made EPs, however, one would rather bet on a black metal background, a crush for Dario Argento and a force-fed religious education. This would explain his satanic mood, his passion for kitsch sounds and his adoration for all kinds of enjoyment. Whatever his influences, Carpenter Brut does not lack the talent to create in-your-face vintage killer tracks.

This is the long-awaited reissue of Carpenter Brut's self-released EP trilogy. Presented in a slick 8-panel 3CD digipack-set with killer artwork designed by France's most notorious design-due Førtifem. I’ve enough humility to admit that I’ve been somewhat swept along by the recent ‘dark synth’ trend. What fascinates me is that so many metal fans simultaneously discovered a genre which, on the face of it, is foreign to their own. My own yearning for ambience and nostalgia led me to the Bandcamp pages of Lazerhawk and Perturbator, among others. Not long after, a label which had originally focussed on extreme metal signed Perturbator and the genres were officially wedded. Another of the dark synth acts which resonated widely with metal fans, and continues to do so, is Carpenter Brut.Judging by the number of supporters on his Bandcamp page alone, Carpenter Brut—whose real name Franck Hueso—is one of the foremost exponents of the synthwave genre. With three six-track EPs (6, 6, 6) to his name—now combined into a single compilation which is this review’s subject—the Frenchman has staked quite a claim to kingship; not for the quantity of output but the quality. I’d been inexplicably neglectful of Carpenter Brut and in being asked to review his material, therefore giving it the necessary attention, I now know why: the songs are too perfectly composed to feel like the work of an artist struggling against his own inadequacy and strife for perfectionism. Perhaps I’ve become so accustomed to the mindset of the self-propelled underground music composer, battling against all odds to express his or her self, that I’ve forgotten to appreciate true accomplishment when I see or hear it.For the uninitiated, dark synth and synthwave evoke the hallmarks of ’70s and ’80s horror and sci-fi film scores, but often with a little more pop sensibility and the fatter, louder production enabled by modern technology. At the heart of the music is a nostalgia, recreated lovingly by a careful consideration of synthesizer sounds. Carpenter Brut succeeds in taking more modern electronic music techniques such as beefy distorted bass sounds which echo those of dubstep. Another of its more unique aspects are the left-of-field samples which end and begin some of the tracks; these introduce a kind of lunacy which compliments the natural, tonal approach of the songs’ individual bodies. Vocals play a role only in a couple of songs, such as ‘Obituary’, and most notably on ‘Anarchy Road’, whilst lead electric guitars rear up with a vengeance on EP II‘s ‘Matt Meet Striker’, among other songs—more convincingly than from most of Carpenter Brut’s peers. ‘Paradise Warfare’ on EP III even features a saxophone so convincingly real that it, well, it may actually be a saxophone. Why not? Carpenter Brut clearly doesn’t cut corners anywhere else.In terms of the project’s obvious strengths and weaknesses, it would admittedly be difficult to face detailing either. The production is, frankly, flawless. Each of the passages that are used to build a song are assigned their most fitting synth sound; the mix is dynamic in its separation yet pounding in its delivery, and as mentioned, the soundscape blends the project’s inherent retro qualities with a contemporary approach seamlessly. The mix is, in fact, so well-balanced that it works against the strength of the melodies for the simple reason that none of the parts leap clumsily from the audial landscape, and are so naturally positioned through masterful composition that their smooth entry sounds no alarm, so to speak.This fine collection of Carpenter Brut material has the heaviness of metal, the drama of classical music, the nostalgia of ’80’s pop, and the atmosphere of an action or sci-fi film score. Trilogy is capable of rivalling Daft Punk‘s Tron Legacy soundtrack (which I suspect served as something of an influence). There is a variety on display, offering moments of soaring majesty, dirty funk, insanity, car-chase urgency, and laid-back easiness. The excellent cover art cleverly reflects all of these sentiments. This genre isn’t about performance or musicianship but composition, technical mastery, and imagination. Carpenter Brut demonstrates a frightening aptitude for all of the above, and by doing so forces me to proclaim this the best of a genre which I have delved into with exhaustive enthusiasm. Trilogy is a faultless collection that only falls short of full-marks in order to leave room for future achievements.
Trilogy 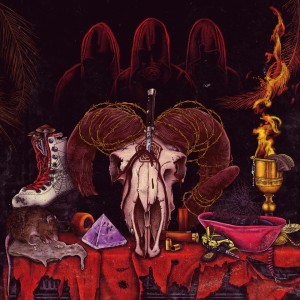