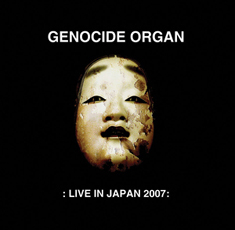 CHOOSE AN OPTION
[CD/DVD edition] Japan has been a wasteland for German industrial and/or power-electronics bands for many years, but in 2003Genocide Organ entered the motherland of noise. Invited by Teito and MSBR, Genocide Organ played two remarkable shows in Tokyo. The first in a typical noise/hardcore club called 20000V, and the second at a small theatre called Die Pratze. Because of the two different locations and atmospheres, G.O. prepared two completely different sets. While the material at 20000V featured tracks from what was, at the time, the forthcoming album 'In-Konflikt', plus a selection of powerful, well-known tracks; the setlist at Die Pratze featured more calm and unreleased tracks integrated into a theatrical-type performance. Both gigs represent the repertoire of Genocide Organ, which makes this band more than just a phenomenon of one genre.

The two shows are presented here on DVD in their entirety, edited from three different camera angles by Frank Merten of Seismic Wave Factory, known for the visuals of Herbst9 and Land:Fire. The DVD is professionally mastered and features a fully animated menu.

In 2007, Genocide Organ returned to Tokyo for two more shows, both hosted at 20000V, and again, each show had a different setlist. The audio CD in this collection features a selection of the best tracks from both evenings. Many had never been released or played live before, while some old favorites appear here in completely different versions. The quality of the recording is amazing, and you will feel the full power of these two gigs.

[LP edition] The release contains the best tracks from the two G.O. Tokyo performances in 2007. All tracks live in Kouenji 20000V: 23/24 June 2007. The LP comes housed in a gatefold sleeve with printed inner sleeve and an A2 poster.