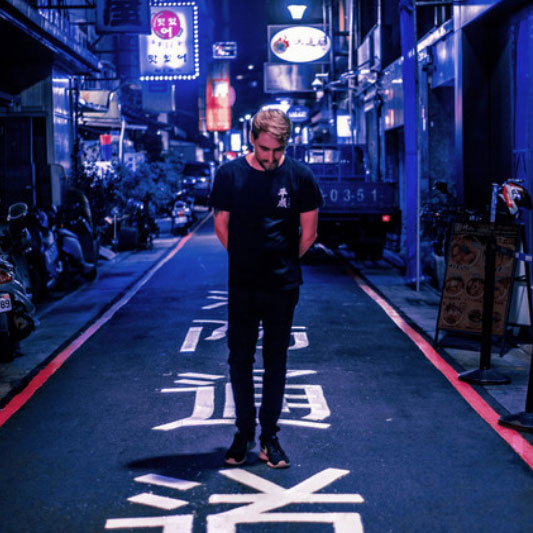 Boucle Infinie (Rémi Gallego) is a producer from Perpignan, France. He is mostly known for his prog metal/idm project The Algorithm. Although heavily influenced by Synthwave, Boucle Infinie's style drifts from IDM to post-rock, and use retro sounds as a mean to carry nostalgic atmospheres. The first EP called '直線移動' released in November 2017 is described by Rémi as a "very personal EP that mixes melancholic textures, melodies of hope, and heavy guitars with retro synthesizers. It's a nostalgic, dreamy voyage into my deepest self."

"Some of you may know French musician Rémi Gallego for his proggy-electronica-metal instrumental band, The Algorithm, AKA the best video game music around that’s yet to feature in an actual video game. However, in a recent move that’s situated far away from the multi-layered, bi-genre sonic assault of The Algorithm, Gallego has pushed-off a far less aggressive-sounding project with his new EP, ‘直線移動‘; a deep exploration into the sonic realm of both cinematic post-rock and 80’s synthwave.

Composing, producing, tracking, mixing and mastering under the new Boucle Infinie moniker – which in English means “infinite loop” – we see Gallego combine post-rock and synthwave into an expansive yet cohesive whole. He expertly slams melodic tremolo guitars, airy atmospherics, sense of scale, emotive melodies and lengthy compositions of post-rock with the hi-fi bass lines, warm analogue synths, ambient pads, John Carpenter-esque synth stabs, drum machine beats, ominous electronic wobbles, digital effects, and bright 80’s guitar riffs of the latter retro-loving format. The result is Boucle Infinie’s debut EP being made up of five mesmerising widescreen soundscapes; a wonderful crossover of two styles near-perfectly suited to have been meshed together. All with some IDM and trip-hop elements thrown in for good measure!

So, basically, just think of the retro synthwave approach of Timecop1983 or The Midnight (minus those gnarly saxophone solos) teaming up with the simplistic but layered and effective songwriting of Collapse Under The Empire and the dreamy lo-fi ambient sounds of Tycho."

"To say that this album is a change of style for Rémi Gallego is a massive understatement. He’s a well known niche as The Algorithm, the electro-metal you either love or you hate, and this time he has put away that intensity for something extremely different with Boucle Infinie, his new project.

You can tell from the first second of “直線移動” that this is an entirely different beast altogether. It has a slow build up, with instrumentation and a style that wouldn’t be out of place in a cyberpunk 8-bit game, and builds up beautiful to its first climax, before descending into calm again, only to come around for second helpings. It doesn’t feel like the 7:57-minute behemoth it is, which is an excellent sign that it isn’t boring music (it isn’t). In the whole album, Rémi doesn’t waste a second with needless technicalities, he goes for what is needed, keeps you guessing at what will happen next, and doesn’t let up at all."

"Synthwave is making some serious traction across the board. The mix of 80’s retro synths, massive soundscapes and John Carpenter throwbacks are turning everyone into a dance crazed mindless zombie like you’d find in They Live. Nowadays it’s not uncommon to see artists like Perturbator and Carpenter Brut infiltrating rock and metal lineup, showing that there’s something for even the staunchest metalhead to enjoy.

Taking influence from both metal and Synthwave, producer Remi Gallego, also more commonly known as The Algorithm, has produced his first EP 直線移動 under a new alias Boucle Infinie. From the first glance of the cover art, you can expect to hear the standard Synthwave tropes, which is not necessarily a bad thing. However that’s where 直線移動 catches you off guard. Alongside the dreamy retro/Synthwave aspects of the record, outside influences of Post rock, metal and IDM give the songs texture of epic proportions. One of the record’s highlight being the Depeche Mode worship track Inside. Featuring guest vocals from Philippe Charny, you could easily slip this into an 80’s playlist without anyone being none the wiser. Whilst sticking to the formula laid out before him, Boucle Infinie has created quite possibly one of the best Synthwave records to date. A record that could even gives leading artists a run for their money. A must have purchase. 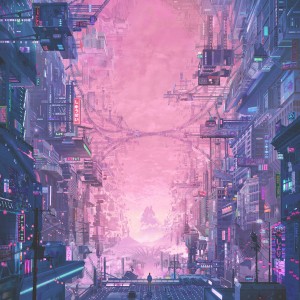